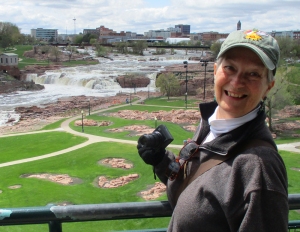 Ellen Behrens’ short stories, articles, essays, and reviews have been widely published. Her fiction includes the novels “Superstition Victim,” “Yuma Baby,” “Pea Body,” “None But the Dead and Dying,” and the short story collection “Road Tales: Short Stories About Full-Time RVing.” She is former fiction editor of Mid-American Review and the recipient of an Ohio Arts Council Individual Artist Fellowship. She and her husband have been living the “full-timer” RV lifestyle since 2009.

Denise:  I find it interesting that you and your protagonist are living the same lives, or should I say have similar lifestyles. You and your husband are traveling throughout the United States enjoying all that nature offers with your RV.  This is the foundation of Walt and Betty’s life, as well. The only exception is you aren’t solving mysteries. So, how did their carefree life turn into mystery solving when they aren’t on the road?

Ellen: Betty’s always been haunted by the loss of their second son Mark, who went off to college and was found dead by “natural causes.” She tried to find out what happened to him but couldn’t, so now she’s driven to figure out what’s behind other mysterious deaths. They started RVing when Walt thought getting Betty out into the world would be good for her, so they (yes, like we did!) bought an RV, sold their sticks-and-bricks house, and are now living and traveling as full-time RVers.

Ellen: Not much different than anybody else’s, except for Betty’s obsessive search for what happened to Mark.

Denise: What mysteries have they solved so far in the series?

Ellen: In Pea Body, which takes place a few years after hitting the road, they’re spending Betty’s birthday at Pea Island National Wildlife Refuge in the Outer Banks of North Carolina, birdwatching. When Betty spots something in a pond from the observation tower, her curiosity gets the best of her. What they discover is the body of a young woman, and when it turns out she’d been Betty’s kiteboarding instructor just days before, they’re linked to her death. Unable to completely accept the vibrant, athletic young woman she’d just met had suddenly committed suicide, Betty is compelled to investigate.

Later that year, wintering in the desert Southwest while awaiting word on the birth of their third grandchild, Betty sees a man swat a little girl while they’re driving their RV along Interstate 8. When they decide to tail the car (yes, in their huge fifth-wheel RV) they’re led all around Yuma, Arizona, and finally to a manufactured home south of town. The man threatens them, but the woman with him sends off vibes Betty can’t ignore—she seems so like the abused wife Betty had once been herself. She returns later to apologize but only makes things worse. Trying to get her mind off things, they take a walk in the desert where Betty finds a stuffed toy among a heap of discarded trash. Her blog post about finding it leads her to a mother missing her child. Betty can’t help wondering if it’s the same little girl she’d seen in the car. Yuma Baby follows Walt and Betty through the tangle of intrigue that uncovers a much deeper, darker world than they could have imagined.

Denise: What brought them to Superstition Mountains in the third installment of the Rollin RV Mystery Series? Can you tell us exactly where it is located? 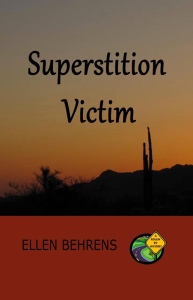 Ellen: Walt and Betty have hit a point in their travels where they want to downsize to a smaller rig. I gave a lot of thought to where they’d shop for one, and the various adventures they could have in different places.

Years ago my husband and I stayed at the Lost Dutchman State Park, just outside Apache Junction, west of Phoenix, Arizona. Among other possibilities for setting this novel, this had all the right elements: plenty of dealerships for Walt and Betty to shop among and in a big-enough metro area I could slip in an imaginary dealership among the real ones, plus a great campground not too far away that I was familiar with.

We hiked the Syphon Draw trail, as Walt and Betty do, but fortunately had even fewer neighbors in the campground than they do in the book. As in the earlier books in the series, you can actually go to many of the places mentioned—and if you do, you’ll see where I nudged reality a bit here and there to make the book work. The Superstition Mountains are beautiful but brutal—a great setting for a mystery!

Denise: I’m sure you’re aware of the superstitious legend connected with the area. Can you tell us about it?

Ellen: Yes! The Lost Dutchman State Park is named for the legend of the Lost Dutchman’s gold mine, which some consider the most famous lost gold mine in America. It’s named for a German who (it’s said) discovered gold in the Superstition Mountains but died before he could tell anyone where it is. A TV show was done about this (2015 on the History Channel) but only lasted a season. The history of the location is deep, but it’s covered so much in so many ways by other writers that I didn’t focus much on it in Superstition Victim.

Denise: Why are Walt and Betty looking for a new travel rig? How did they learn about RVs for Perks dealership?

Ellen: This change for Walt and Betty also parallels one my husband and I went through. We’d been full-timing for awhile, but found the huge fifth wheel and truck we used to tow it limited where we could stay, so we decided to downsize to something more maneuverable. Walt and Betty are looking for a smaller rig, too, for the same reasons. RVs With Perks is a fictional dealership; Walt and Betty are hitting all the major dealers to see the most options as they hunt down their new RV, so stopping at RVs With Perks is just another RV dealership on their list.

Denise:  Without giving away your plot for “Superstition Victim”, tell us what leads Walt and Betty to the next mystery?

Ellen: One of the challenges I’ve given myself for each Rollin RV Mystery is to try to mix things up a little more each time. Yuma Baby was a little more complicated than Pea Body, and Superstition Victim is even more tangled. At the state park (modeled after the Lost Dutchman State Park in Arizona, but unnamed in the book), a murder victim is discovered in a nearby trailer. Their proximity to the crime—and their observances of things around it—makes them key to the investigation local officials undertake. Meantime, they’re trying to find their new RV and deal with oddball neighbors.

Denise: Who do they meet at the new campground?

Ellen: So glad you asked this! In Pea Body, Walt and Betty met some interesting fellow campers, but during Yuma Baby they were so focused on things outside the RV park there wasn’t much going on where they were staying. In our real-life RVing we’ve met a slew of interesting and often unusual people, and I wanted to bring that element back into play in Superstition Victim. This time they meet Moxie and her dog Poopsie, among others. Moxie’s a newbie RVer with more enthusiasm than understanding about how to hook up her utilities, for example.

Denise:  Of course, they’ve put themselves in danger again. Have they learned how to protect themselves?

Ellen: Walt has always been better at protecting them than Betty, who’s impulsive and doesn’t think about her safety as often as she should. There’s a particular scene in here that gun enthusiasts are likely to enjoy quite a bit, but that’s all I’m revealing about that 🙂

Denise: Where do you think they’re headed for their next adventure?

Ellen: They’ve been planning to take the fifth wheel to Southern California where they’ll park it on a lease site while they travel in a smaller rig—so maybe there. Getting them into a smaller RV opens up a lot of possibilities—sometimes I get so overwhelmed it’s hard for me to decide on a setting. And for me, setting sets up the plot and complications, so it’s crucial for me to make that decision—soon!

Denise: How far along are you with this new book?

Ellen: I’ve actually been working on a non-fiction how-to book for writers. Awhile back I did a very short compilation of articles based on a column I write for a group of RVing writers and it was pretty popular (maybe because it was free?!?) called Fiction Tips. This new one is something I’ve been wanting to write for a long time. When I finish it I’ll re-focus on the Rollin RV Mysteries, and by then I should at least have a better idea of where they’ll be when the book opens!

Excited to sign on as a reviewer for Forever. I now promote two great publishers. Already reading The Inn on Sweetbriar Lane by Jeannie Chin. Love the cover and the new size paperbacks. Reviews will be posted on gottawritenetwork.wordpress.com.
Made Mandel bread with chocolate chips and almonds. Most people would call this Biscotti. OMG, it was so good. This cookie was something my mother, Sandy, use to make for Dale, Albert and I. My recipe was from a cookbook I got from a wedding shower over 30 years ago: "The All New Portal to Good Cooking," an ORT cookbook. Have to find out if the have newer versions.
Follow GottaWriteNetwork on WordPress.com